Saturday, November 10th  at 1 pm
Meet in front of the library to car pool to our field location

Join coastal BC mushroom expert John Field, Ph.D on a walkabout to find some of Bowen’s mushrooms.  We will have a leisurely stroll of about 2 hours seeking out mushrooms that we find along the way – picking our route based on current conditions. Due to the popularity of this event and our aim to make this as interactive as possible, this is a free but members-only event limited to 20 people. Please pre-register with DG at dgbwh@telus.net.  You may also call DG (-0134) with any questions or to pre-register.
Posted by Bowen Island Nature Club at 2:51 PM No comments:

Today, forester and conservationist Everhard van Lidth de Jeude led the Nature Club (F)unschool group on a walk into Fairy Fen Nature Reserve (formerly Mystery Fen), with the intention of hanging up some signs there. They are very nice, metal-clad signs, welcoming visitors to Fairy Fen Nature Reserve, and alerting them to its status as a "Reserve", with icons declaring no cycling, no dirt-biking, and no ATV's. The kids were interested, and helped to carry the signs down, as Everhard led them through the woods toward the fen, explaining interesting natural and human processes as we witnessed their evidence along the way; pointing out various types of vegetation, etc. Then...

We trekked into the Nature Reserve, and the sounds of the quad disappeared in the distance, but we immediately found the fresh clods of mud it had churned up, and its tracks leading away from the other "Fairy Fen Nature Reserve" signs hung by other Conservancy members.

What a learning experience for the kids!

Everhard then took us to the edge of the fen, and pointed out all sorts of interesting plant life; talked about the provenance of the fen and surrounding boggy new forest, from what was probably once a lake. He told us that somebody had come with expandable rods to measure the depth of the fen, but that he had stopped when he ran out of rods at about 8 feet. We went around the fen, to find the site of a long-ago landslide, and deep grooves in the mountainside probably caused by logs being hauled down the slope when the place was logged many decades ago.

And all the way around the fen, the kids made note of the small devastations (and litter) left by quads and bikes. Fairy Fen was made a preservation area for a reason; it's a sensitive ecosystem and a beautiful area, and it's especially suitable for helping our island's youth to understand the importance of our natural home. Today they learned about its fragility and its need for protection.

Posted by Bowen Island Nature Club at 8:48 PM No comments:

When I told my three year-old about the barnacle-eating bear we saw, he asked 'Were you very brave and didn't scweam?'  I have to admit that floating along in the Apodaca on such a beautiful day, it was hard to feel intimidated by the big ball of fur on shore.  And he didn't seem very concerned about us.  It's the first time for years that I've seen a bear, and what a privilege to observe one in his natural environment, doing ‘normal’ bear things.  Not going through garbage cans or scrumping apples, but eating barnacles from the rocks of beautiful, pristine coastal bluffs.  Equally unimpressed by our visit was the bald eagle, aloof and perfect in his white and black outfit, eagle-eyes glowering and looking every inch the gatekeeper of the bluffs, perched atop a pointy, tall rock.  Other nature-spotting highlights on the trip included: sailing close to the beautiful Defence Islands with their incredible diversity of gnarled and contorted bluff trees, set in the aquamarine, glacially silted waters; the very charismatic seals basking on Pam Rocks and Christie Islet, many of them with their pups; for the birders, we also saw oyster catchers, pigeon guillemots, herons and cormorants on the rocks and in the water around them.

After we passed McNab Creek the setting changed to a more industrial theme.  Approaching and beyond the pulp mill at Port Mellon were booming ground after booming ground as well as small scale lumber processing mills.  Every available inch of shoreline seemed to be taken by the log booms and we saw the occasional tug boat working them.  On the south coast of Anvil Island we saw the ex-BC Ferry poking out of a tiny bay, awaiting its fate.  We also saw a ‘live’ ferry heading to Langdale.  It was really interesting to see the reach and extent of industrial activity which is normally out of sight from Bowen.

As with all Nature Club events, our trip was enriched most of all by the wonderful people who came along.  Ranging from toddlers to those who remember the glaciers retreating, visitors to those who remember the Apodaca when she was new, and everyone in between, all were enthusiastic participants and shared their gift of wonder and appreciation.  Thank you to all who came along and thank you to Brian, Mike and the Apodaca for another amazing trip. 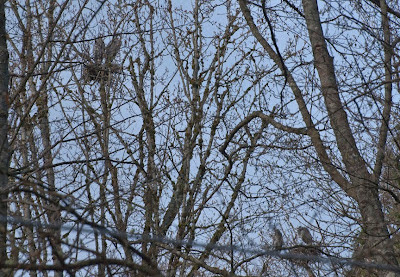 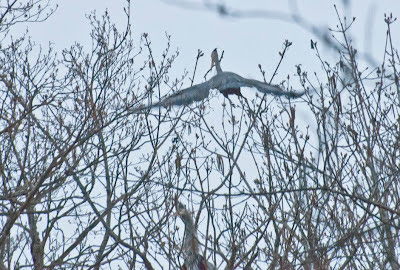 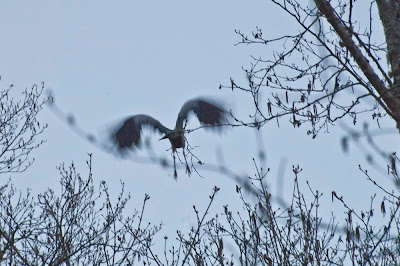 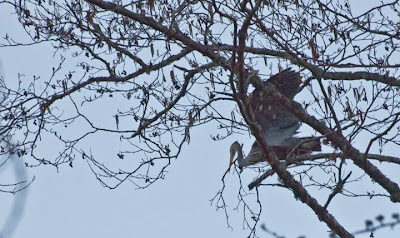 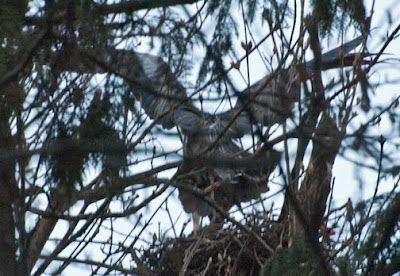 The great blue herons are back in their nesting colony behind the Bowen Library (Old General Store) in Snug Cove.
I took a number of photos including mating, nest building and occupation of nests by pairs (male and female).
The quality of images is not the best, the mating and nest building occurred near dusk. Also, to ensure that I did not disturb the mating rituals, I restricted myself to the sidewalk and grassy verge along government road and kept to designated trails in Crippen Park.
I saw three active nests.
Please report any sightings of herons in trees to Bowen Heron Watch (Sue Ellen Fast at sefast@shaw.ca or Alan Whitehead at alanjw@telus.net ).
Photos by Will Husby
Top: 2 pair of herons occupying nests
Middle 3: Heron gathering twigs to ad to nest.
Bottom: A pair of herons mating on nest
Posted by Bowen Island Nature Club at 10:35 AM No comments:

Benefits of membership are a subscription to BC Naturalist Magazine, email reminders of outings, and priority reservations for outings. Also, some outings are for members only.

To become a member, or for any other inquiries, please email us at bowennatureclub (at) gmail (dot) com.